I am always on the lookout for old feed sacks on my garage sale and flea market days. I don't find them very often. I have made only two projects so far from them, the hat and skirt I showed last week. Feed sacks are an important part of textile history and were produced in Europe as well as the US. I almost feel bad cutting one up to make something from it but that is what our grandmothers would have done, right ? Waste not, want not ! This article is focusing on the American style feed sack. Don't get me wrong, I love the European style as well. However, the striped European grain sacks that are so popular with collectors are too thick to be made into clothing items. To read about the striped grain sacks read this article I wrote a while back.

Here is a brief history of the feed sack from Amy Barrickman. This is an excerpt from an article on Burdastyle.
"In the early 1800s, due to an advancement in the quality of the materials and their construction, the manufacturers of staples such as grain, flour, sugar and animal feed transitioned from shipping in boxes and tins to, instead, cotton canvas bags. With the introduction of this new cloth into the home, thrifty women everywhere began to reuse the cloth for a variety of home uses – dish towels, diapers, and more. The bags began to become popular for clothing items as well. Realizing this recycling trend was here to stay, the manufacturers began to print their cloth bags – or feedsacks – in a variety of patterns and colors, assuming that they could sell more feed and seed if their feedsacks were desired by more women than their competitor’s." 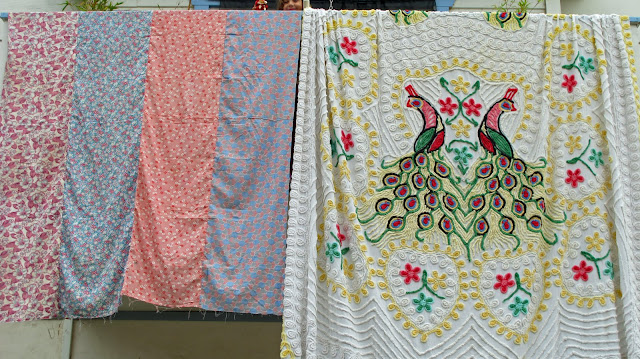 In the 1920's mills started producing sacks in printed fabrics. More than 40 mills made fabric for bags in thousands of different patterns. Instead of printing directly on the sack, factories affixed their logos to easily removable paper labels. A typical women’s dress took three feed sacks; bragging that you were a two-feed sack girl was the equivalent of mentioning today that you wear size 2. Wives and daughters instructed husbands and fathers to buy feed in sacks with particular patterns so they could complete dresses. In addition to overall florals, patterns included border prints (perfect for pillowcases and curtains) and children’s favorites, like cowboys and animals. If the pattern sold well, it might be reproduced as yardage.&nbsp During World War 2, feed sack sewing was considered patriotic and sewing itself was enjoying a resurgence as well.
Technological advances during World War II, however, meant that by 1948 more than half the items previously in cloth bags were sold in paper or plastic (cheaper to produce and considered more sanitary and rodent-proof). Cloth bags disappeared over the next 10 to 15 years, though some are still made for Amish and Mennonite communities, small mills, and the tourist industry.
Over time, the popularity of the feedsack as clothing fabric increased beyond anyone’s wildest expectations, fueled by both ingenuity and scarcity. By the time WWII dominated the lives of Americans, and cloth for fabric was in short supply due to its use in the construction of uniforms, it was estimated that over three and a half million women and children were wearing garments created from Feedsacks."

Above  is a feed sack quilt cover I found at a garage sale this past weekend. On the right is a chenille bedspread also bought at the yard sale. Grand total for both : $ 8.00. 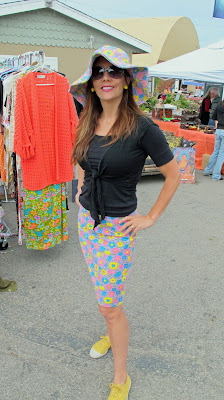 My outfit made from feed sacks.
Have any of you ever made anything out of a feed sack?