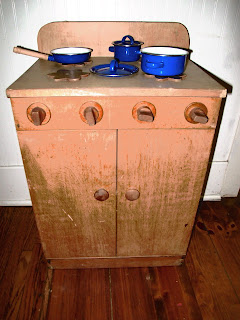 Vintage and thrifted toys look better than most new ones unless you spend a small fortune ; they are cheaper than new ones and they are good for the environment as well as your decor. I lived in an upwardly mobile area of Los Angeles after my third child was born and I learned from other mothers in the area about all the terrible hidden dangers of modern motherhood. Some of the mothers were close to hysteria but some had a point. What were some of the dangers? Let's see.. vaccinating your child could cause potential bodily harm , bit if you decided to go on a spiritual retreat to India with your yoga instructor and should decide to bring your nanny and baby because your husband had to actually go to work, well than maybe it was OK. Letting your fourth grader ride his bike a few blocks to school  was an invitation to child molesters and you were risking him being run over by a car, letting your child walk a few doors away alone to visit a friend  was also questionable , not buying organic throw away diapers from Whole Foods was a sign that you didn't understand the danger of dioxins, but actually using cloth diapers was well, a little TOO granola, unless you hired a diaper service. Not buying all organic baby food was a sign you didn't care about your baby, but actually making and freezing your own was considered a quaint but old fashioned and labor intensive notion.  And buying plastic toys was out of the question : didn't everyone know about the dangers of BPA's ?
Well fast forward eight years and one large recession later and maybe some of those women have come down to earth a little . I won't know because I moved away . And here I am washing cloth diapers in my washing machine but still wanting beautiful wooden toys for my current baby but not wanting to spend two hundred dollars or so to buy one from a chic and ecologically friendly website or catalog.  Healthy living and a pretty environment shouldn't be only for the rich. I started looking for toys at thrift shops and flea markets because  I don't like the way a house full of plastic toys looks.  With a little foot work there are lots of great children's toys to be found at thrift shops, yard sales, Craigslist and the more expensive flea markets. I spent 25 dollars on the little wooden kitchen below and my baby and I both love it! And to be honest I do buy the occasional plastic toy once in awhile. Barbie will forever be a fixture in a house were four daughters have lived! Oh yeah, and it's fun to make Barbie clothes too. 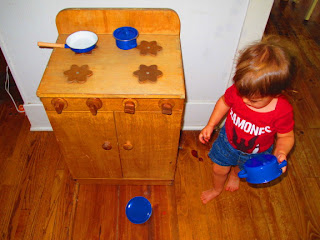 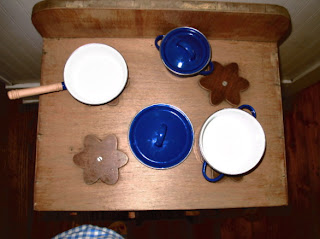