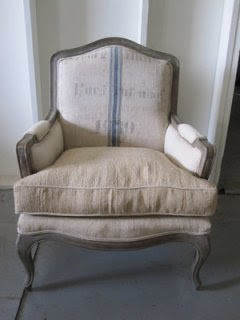 A chair upholstered with an antique grain sack 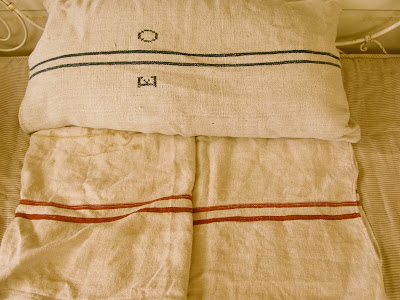 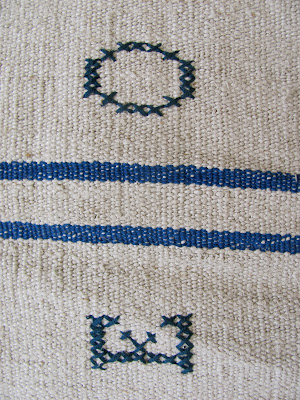 Some details from my grain sacks above.
Well, my daughter broke my camera over the weekend so I haven't been able to take photos of my current projects. I await my new Canon G-12 in the mail, a splurge but a worthwhile one I hope. So the past few days I have been thinking about my blog and my original concept for it which is sewing, country living, French vintage, and parenting. I have been focusing only on the sewing lately which I've enjoyed but I feel it's time to focus on some of my other interests. I'll still be blogging about sewing but you will start to find a smattering of other subjects here and there which bring me to something I have been into for awhile, European grain sacks. I know they have gotten trendy lately and you can even find fake grainsack pillow cases at Pottery Barn,  but I  still love them. There is something about their rough texture and simple embroideries which brings to mind the kind of life people lived long ago. The care which these sacks are made is extraordinary to me, each sack is like a work of art. I have two and haven't yet brought myself to cut them up and make pillows out of them. Can you imagine someone taking the time to hand embroider their initials on something so utilitarian as a sack used to store flour in ? Farmers individualized these sacks so they could be identified when they were transporting grain, flour, or sugar to the market or from the mill. This was a time when nothing was wasted and things had to be made to last . Some of the sacks date back to the early 1800's. Most have stripes in blue or red on them and many are initialed with monograms. The colors of the linens range in shades from greys, to creams, to sun bleached whites. Ten years ago when I had my place in the South of France, they were easy to come by and were quite inexpensive. Not so anymore. Last year I was at the Rose Bowl Flea Market and some sellers from Idaho were there. It seemed they must have gone to every flea market in Europe because they had hundreds of grain sacks and were selling them for as much as sixty dollars apiece! Handwoven or homespun from strong hemp or linen,  they have stood the test of time. 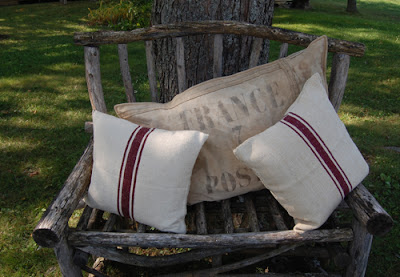