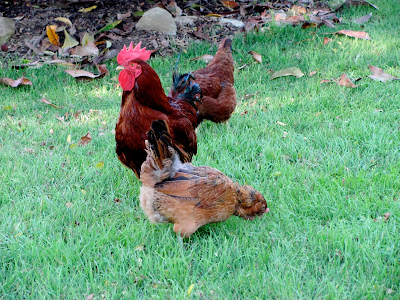 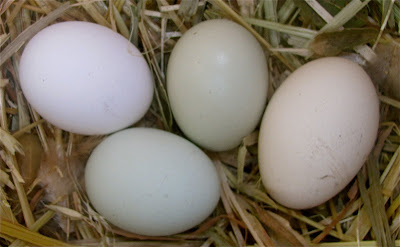 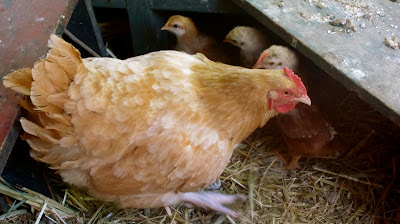 Here is a photo of one of our Momma Chickens with her babies. Above is a photo of those same babies before they were hatched. We don't know if this Momma is actually the real Momma or not because we took some eggs that were in a few nests and she just started laying on them until they were hatched. She could probably lay on an ostrich egg and not realize it wasn't hers. She is very sweet with the chicks. We have to keep them separated from the other hens who roam freely because the other hens would peck the baby chicks to death because even though those baby chicks might actually be theirs, sadly they will never know it and creating a pecking order is their first priority. That's why we have to wait till the babies are big enough to defend themselves before we can introduce them to the rest of the group. And I won't even go into what a jerk that rooster can be. If there was a Domestic hotline for chickens this guy would tie up the line. For a long time we didn't have a rooster because hens will still lay their eggs whether or not a rooster is around. For some reason though they seem to lay more when the fella is there. Richard was over at this old Mexican Rancher's place named Alfonso. Alfonso grows mostly cactus to sell in the local markets to eat but he also has a side business selling chickens. I guess Richard is surrounded by too many girls having four daughters and a yard full of hens so he brought the rooster home.
at 6:12 PM