Dawes Concert at The Getty Center. 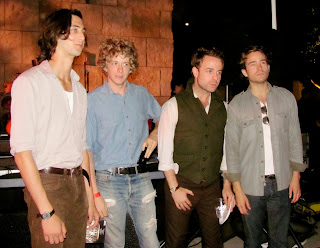 Last night we ventured out to Los Angeles to see a free concert at the Getty Center in Los Angeles. To anyone in the area I would highly recommend these events at the Getty Center . Itsits on one of the highest hills in Los Angeles. Unfortunately, it was very cloudy last night so we couldn't enjoy the views. The band Dawes are an Indie Folk band. They are described as having the Laurel Canyon sound and are very Urban Woodsy. The Doors lived in Laurel Canyon. After the concert my two teenagers met the band and here is a picture. Aren't they cute?
at 4:59 PM