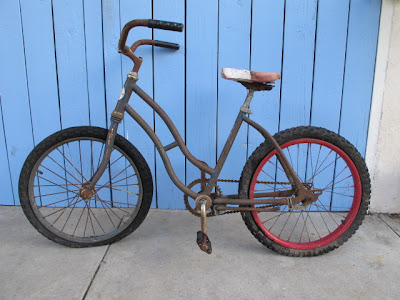 This is a bike I bought Lily at the flea market Sunday for only twenty dollars. What was I thinking? There is a bike restorer in town I took it to and said my bike here will be worth a thousand dollars after he restores it . And how much will it cost for him to restore it? About four hundred dollars! Thanks but no thanks. I'm sure he would do a great job but I think I'll try to fix it up myself first. It's pretty beat up but I found some great ideas for restoring old bikes. One is to rub down all the former chrome parts with aluminum foil so I have started doing this on the handlebars and they are starting to shine up a little bit. To remove rust from the paint you can clean the frame with a brillo pad and soap. It takes awhile but it seems to work. New tires and possibly new rims are going to be needed as well. I have no idea how old this bike actually is but most of the older ones have fenders and this one doesn't so I'm not sure. It's the perfect size for my 8 year old! 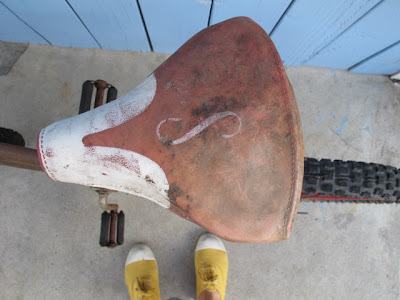 Check out this old Schwinn seat. A good cleaning and some dye retouching should bring it back to life. 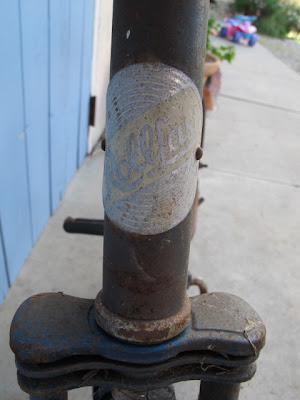 The original Rollfast badge. This thing is seriously weathered. 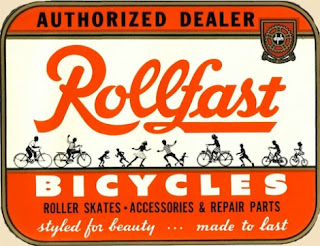 This an ad for the type of bike I bought, a Rollfast which was made in the USA. Here is some info about the company I copied from this site : "The Rollfast bicycle has a very interesting history, to be sure. It begins in the 1890's with a company by the name of D.P. Harris Hardware and Manufacturing Company. Then, in the early 1900's, the D.P. Harris Company teamed up with H.P. Snyder Manufacturing Company, becoming the main manufacturing company. D.P. Harris supplied some of the parts for the bicycles and all of the marketing of them. There are two specifically collectible models of the Rollfast bicycle, the V-200 model and the Hopalong Cassidy bicycles. The Hopalong Cassidy began production in 1952. The Snyder company built the bicycles well into the 1970's, when it finally came to an end.
The first models came with 20” and 24” tires and because of the popular cowboy themes of the 1950's, the Hopalong Cassidy was very popular. These were followed by the “Velocipede” tricycle and the 16” Playcycle. All rather collectible, indeed." 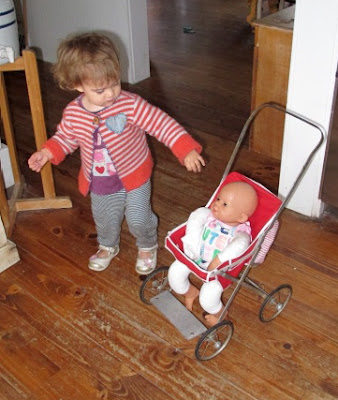 Now on to other toys with wheels. Here is a photo of a cute doll stroller I found the same day. Not a plastic part in sight! And yes that doll is pretty ugly! Don't tell Gigi that though. 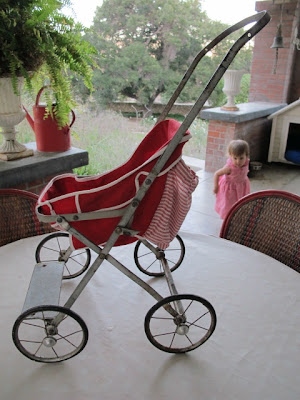 I love the stripe storage pouch on the back. A perfect spot to squirrel away stale cookies and Moms' car keys.