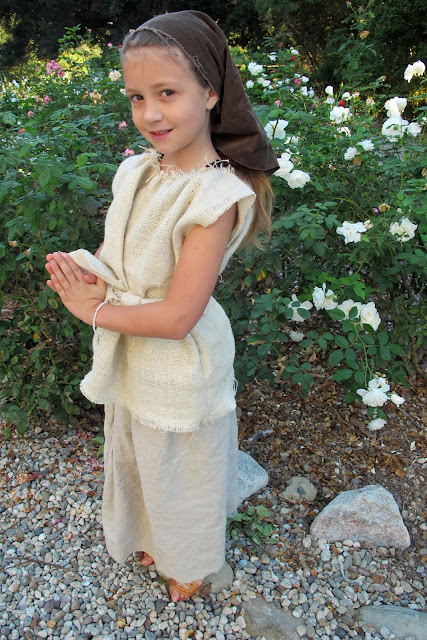 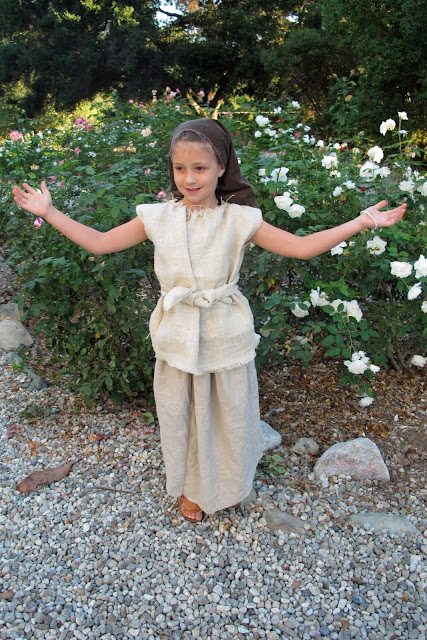 We have a tradition at my childrens' Catholic School of having the younger children dress up as Saints on Halloween day at school. They say a little speech about their saint and the audience must guess who that saint it. My daughter chose Saint Genevieve, who we happened to name Gigi after.
Saint Genevieve lived in Roman France in the 4th century.
This was the third costume I made from scratch in one week. I made the little burlap tunic from leftover burlap from my lampshade project here and the rough linen skirt fabric was leftover from linen I used to cover the backs of these grain sack cushions. It's a good feeling to use up the ends of fabric you have lying around, isnt it? I always save stuff like this because eventually I often need it. Probably an excuse hoarders use too. And hoarders never seem to realize they have a problem, even after the TV cameras show up. I guess the question is, when does saving things start to become a problem? I have three trash bags of stuff in my garage I need to drop off at the charity shop as I write this. It's only been out there a few weeks now! The saints from the old days had simple lives and I wonder if they may not have been able to be so close to God if they had all the junk in their lives today's average person has.
Here is a short description of who St. genevieve was from Catholic Online.
"St. Genevieve was born about the year 422, at Nanterre near Paris. She was seven years old when St. Germain of Auxerre came to her native village on his way to great Britain to combat the heresy of Pelagius. The child stood in the midst of a crowd gathered around the man of God, who singled her out and foretold her future sanctity. At her desire the holy Bishop led her to a church, accompanied by all the faithful, and consecrated her to God as a virgin.
When Attila was reported to be marching on Paris, the inhabitants of the city prepared to evacuate, but St. Genevieve persuaded them to avert the scourge by fasting and prayer, assuring them of the protection of Heaven. The event verified the prediction, for the barbarian suddenly changed the course of his march.
The life of St. Genevieve was one of great austerity, constant prayer, and works of charity. She died in the year 512. Her feast day is January 3rd.