Shopping The World For Fabric, Paris! 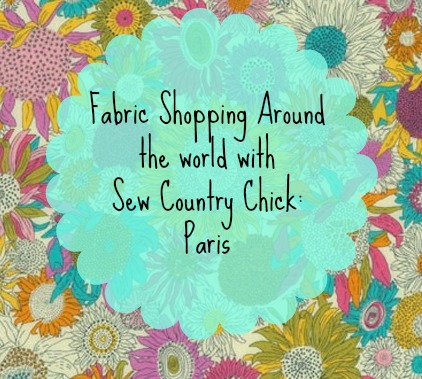 This second installment of my Fabric Shopping Around The World Series is focusing on Paris, my favorite city! To read yesterday's post about Los Angeles, click here.

I have done a lot of traveling alone with my kids in the past. My husband has a career that makes it difficult for him to plan a trip and to be honest, he is a bit of a homebody sometimes.


Someone had to feed the chickens, right? God bless him.

In 2010 I took my baby Genevieve AKA Gigi, on a trip to Paris to see one of my best friends, Monique, who had just had a baby girl. Gigi would be turning one on the trip, and what better place to spend your first birthday is there than the City Of Lights? 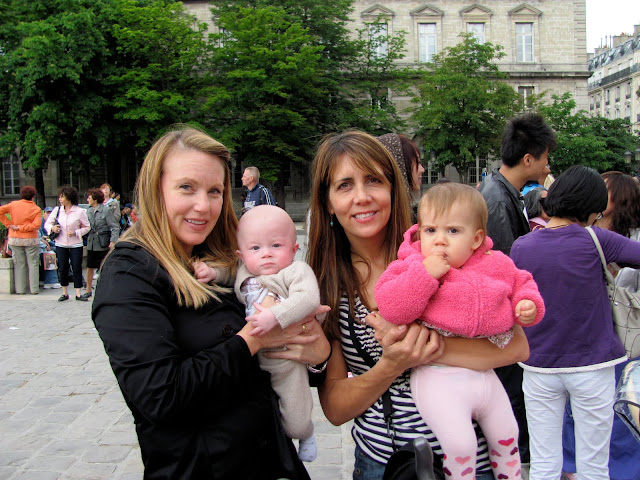 Monique had come to stay with me when we had our village house in the south of France a few years earlier, and she had decided to stay on and live in Paris. She met a Parisian, got married, had a baby, and now it was my turn to be her guest! Her husband was out of town on business, so it was a real girlie get together! 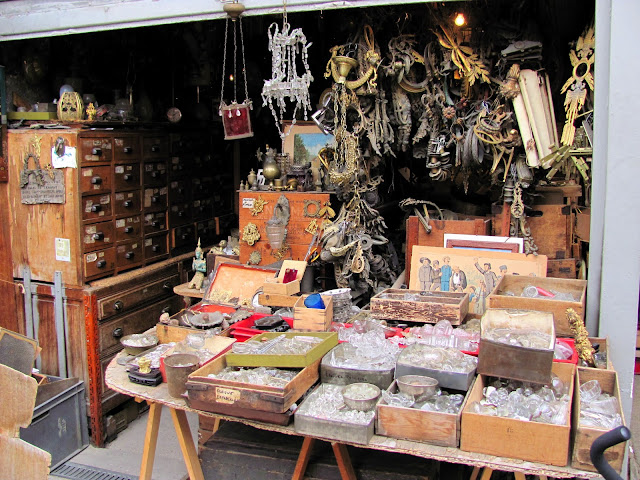 J'adore the French flea markets and I consider them to be the beat in the world. So of course a trip to Les Puces de St. Ouen with Gigi was going to be de rigeur! 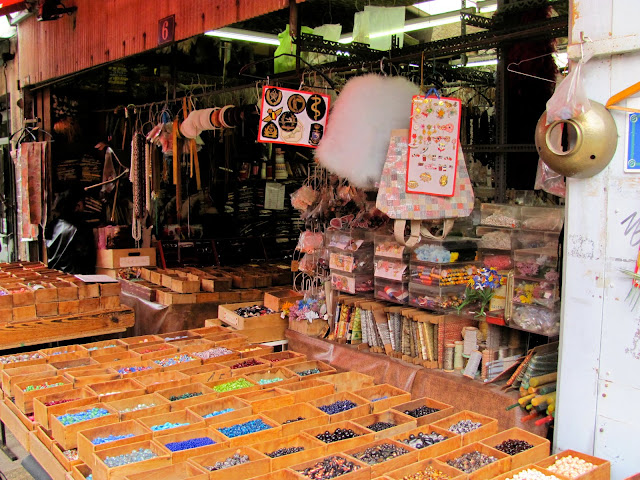 My first stop with Gigi in tow was Les Puces des St. Ouen, the grandaddy of the French Flea markets,  in Paris. There are many different markets that make up Les Puces, which mean the fleas, in French.
While I spent all day there admiring the antique fabrics, buttons, trims, furniture, French Industrial decor, and old tin signs of which I am an avid fan, the only major thing I bought was a tole leaf chandelier from the thirties. Which was going to be a challenge to fit in my suitcase! And I did also buy a French grain sack with two red stripes going up the center.
The vintage fabrics and trims although beautiful, were out of my price range. 15 dollars a yard for trim was going to be a budget buster! 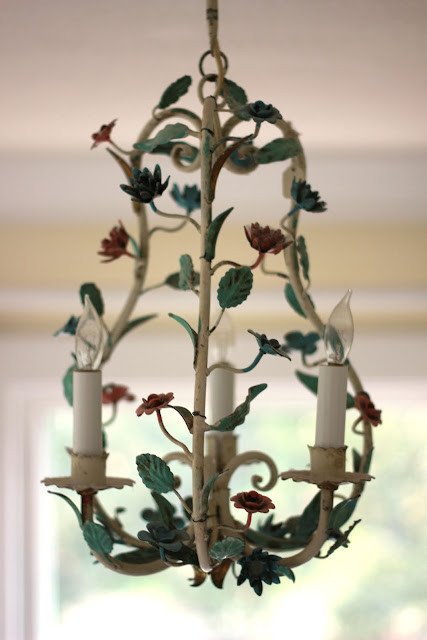 The chandelier I brought back in the overhead bin, now in my bedroom. 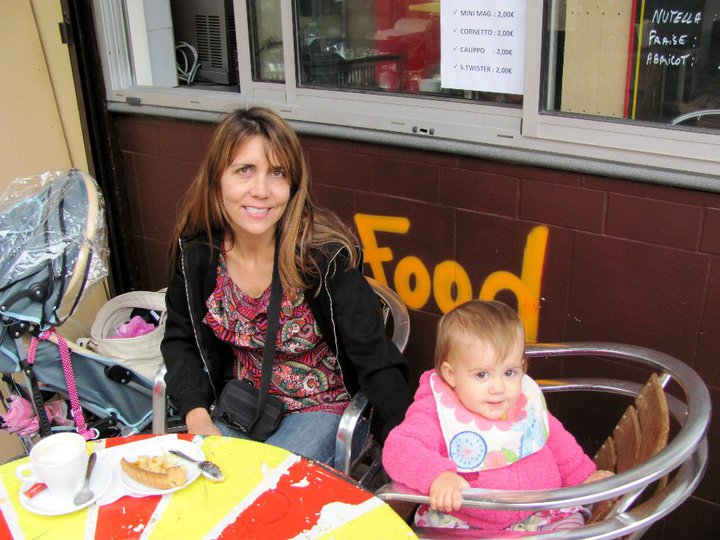 A quick slice of quiche at Les Puces. 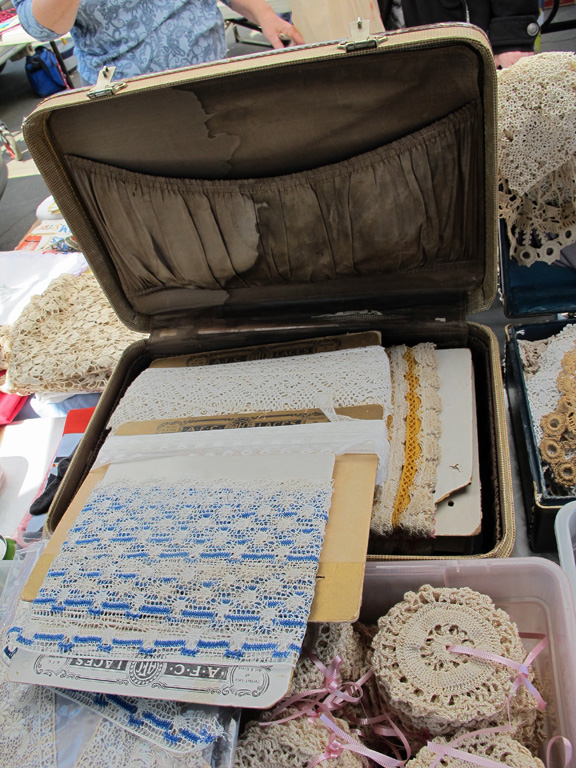 Marche St. Pierre
2 rue Charles Nodier 18e
The next stop in my search for fabrics and trims was the Marche St. Pierre, an area of winding streets filled with fabric emporiums at the foot of the Sacre Couer Cathedral, in Bohemian Montmartre. I went through a phase when I read many novels by the French writer Zola, and the novels often took place in the working class district of Montmartre of the 1800's. I loved those books which gave a glimpse into he underbelly of working class Paris after the Revolution.
Marche St. Pierre is a paradise for fabric shoppers. You will find an amazing selection of high fashion, high quality fabrics, as well as more everyday fabrics at all price ranges here.
The two biggest shops, Reine and Dreyfus, are both several stories high and jam packed with every kind of fabric and trim you can imagine 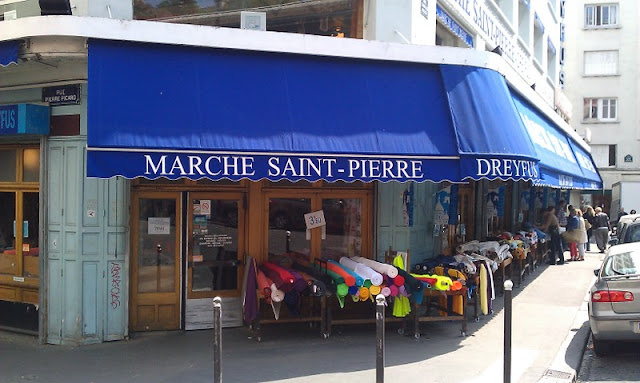 Dreyfus
Marche St. Pierre
Dreyfus was a beautiful shop several floors high. I could have spent all day in this one shop alone, let alone all of the other places in Le Marche!
But of course, little Gigi started to get cranky and we had to leave before all of the salespeople started giving me that look that only French salespeople can give. Believe me after spending five summers there with my older kids who were 3 and 5 our first summer, I knew the look.
One French salesgirl went so far as to smack Isabelle's hand away from something she was trying to pick up once! 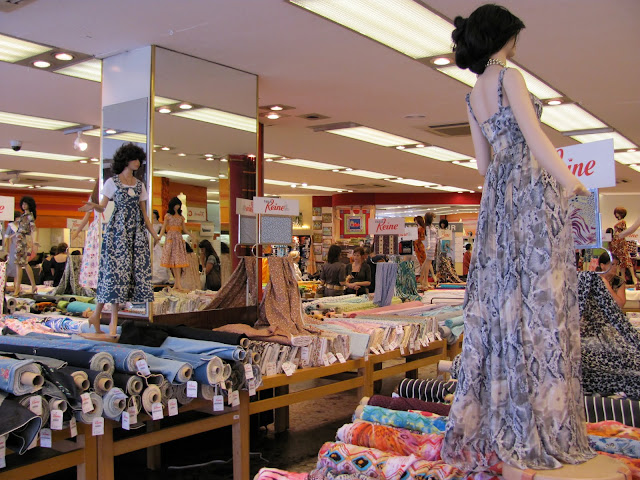 Tissus Reine
at the Marche St. Pierre
Paris
One of the best deals was the Liberty of London Fabric which sells for about 40$ a yard in the US. It's 20 euros a yard there, about 24$. There is also a beautiful assortment of pure cotton trims which I have a hard time finding in the US. I bought some coated cotton in a French style stripe for a tablecloth outside and some dishtowel fabric which actually sells by the yard. I plan to make some cute placemats with it.

Liberty of London fabric at Tissus Reine, a shop in the Marche Pierre. 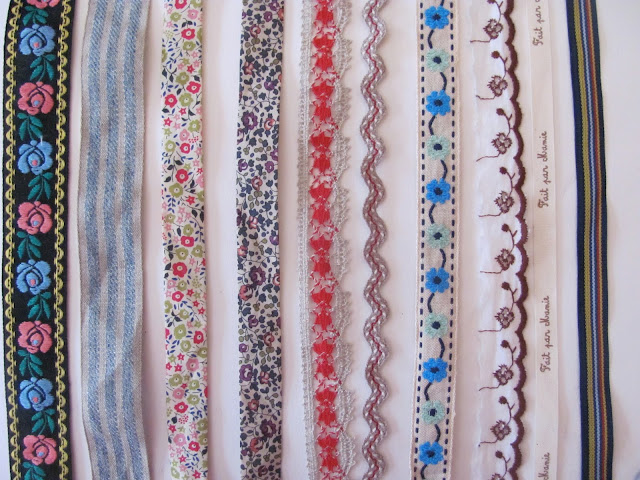 Some of the cotton trims I bought at Marche St. Pierre. 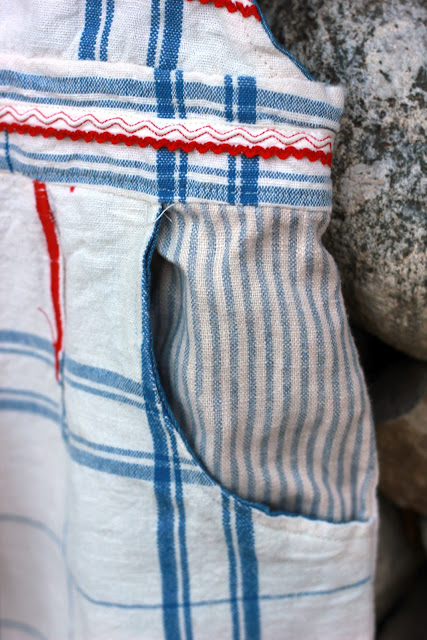 A detail on some overalls I made from the dishtowel fabric I brought back from paris.

And now onto some photos of Genevieve!
I can't believe how much she has grown in the past few years.
How I miss that little baby! 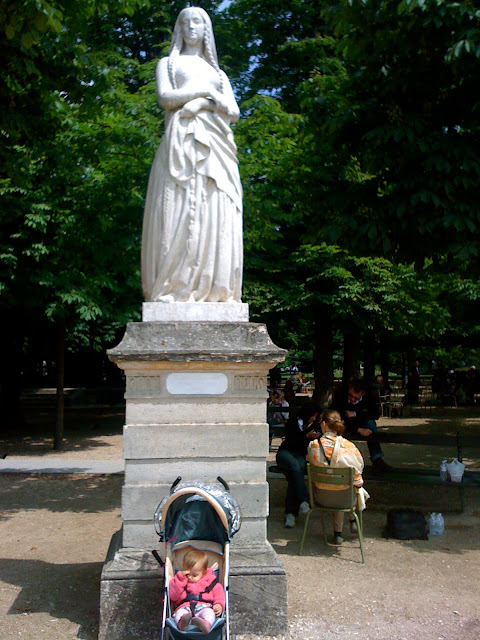 Gigi in her stroller in front of the statue of St. Genevieve, who Gigi is named after.
Patron saint of the city of Paris. 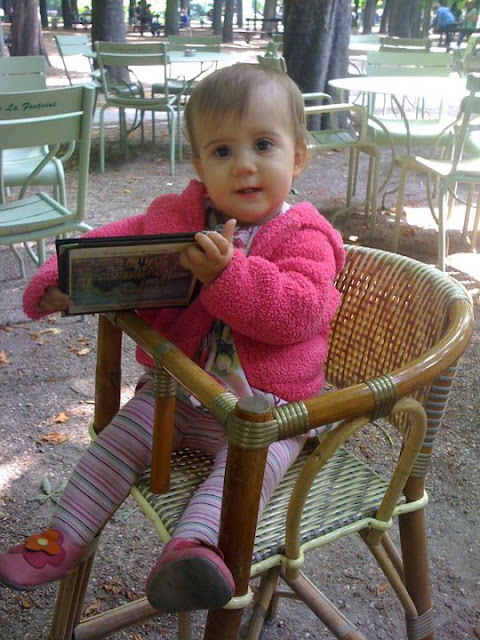 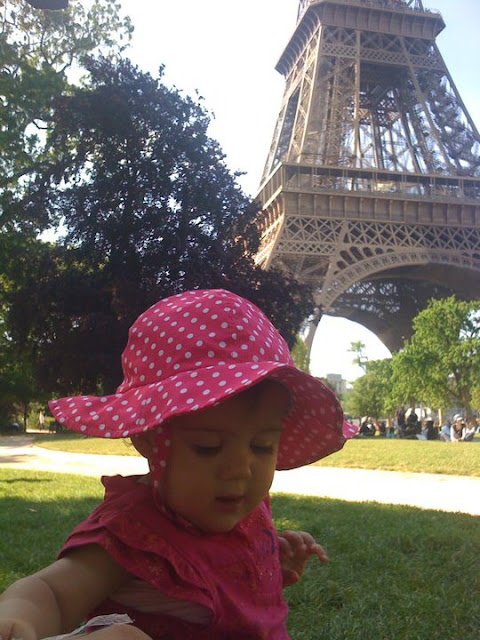 Gigi on her first birthday!